Our 2015 STEM Woman of the Year award recipient was recognized as one of Popular Science Magazine's "Brilliant Ten" young scientists in 2013. 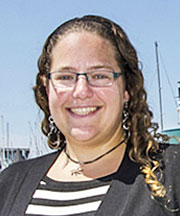 Mya's research uses genomic sequencing to explore the identity, diversity, and distribution of viruses in a wide range of environments, ranging from seawater to sewage. In addition, her laboratory has created new methods for discovering novel viral pathogens causing disease in plants and animals, as well as to explore the environmental reservoirs and transmission mechanisms of these viruses.

Mya is a National Academy of Sciences' Kavli Frontiers Fellow and an Alfred P. Sloan Research Fellow, and was recognized as one of Popular Science Magazine's "Brilliant Ten" young scientists in 2013. Mya is extremely dedicated to community outreach, specifically working to encourage girls in STEM fields. As a young, female scientist, she constantly strives to share the excitement of science with the next generation of researchers and serve as a positive role model. Mya is a lifelong Girl Scout and has positively impacted girls in the Tampa Bay region through creating and equipping a fully-functional marine science laboratory at the local Girl Scout camp Wai Lani. In addition to running numerous activities at the camp, Mya has hosted marine science and technology workshops for over 200 girls and recently served as the mentor for a USF undergraduate honors student who developed a "Conservation Champions" patch program for Girl Scouts.

Mya's laboratory group frequently offers activities to engage the public in their research – including through the Florida Teen SciCafe, the Great American Teach-In, and the Saint Petersburg Science Festival. Mya is also involved as a faculty mentor for the USF Oceanography Camp for Girls, a volunteer moderator for the National Ocean Science Spoonbill Bowl, a FabFems role model, a Florida Girls Collaborative Project leadership team member, and an advisory board member for the Florida Aquarium's Center for Conservation.

Sponsors, Movers & Shakers, and other Guests had fun honoring Mya and learning about Girls Inc!